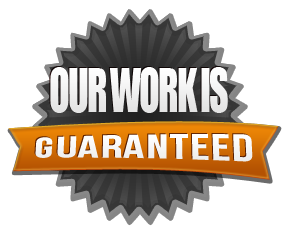 We recently hired D.M.Terrill Contracting for the second time. About five years ago, we had Doug do our concrete driveway and were amazed at his artistry. Doug and his crew were professional. They also built a concrete block wall that was expertly done. So when the backyard project came up, we called Doug.

This time, Doug’s crew leveled our backyard and replaced our cracked and sinking brick walkway with concrete. We also added some large rocks here and there, plus they added to the height of an existing granite stone landscape wall at the back of the property. Doug designed a new wide, curved walkway that really made our entry more open and inviting. His crew formed it up and finished the surface with exposed aggregate.

We were especially impressed with his friendly and conscientious crew. They spent hours spreading and carefully leveling the sand/soil mix that would underlay the rolled sod. When the sod was rolled out, it was cut perfectly to the curved walkway and the edges. It just looked fabulous.

D.M. Terrill Contracting is a great company. I can’t imagine a better job at twice the price.

I found D.M.Terrill Contracting advertised on the back of my church bulletin. I thought it sounded like a good idea to trust a fellow parishioner and gave them the business of replacing my backyard patio. After the job was done...It turned out that it was not only a good idea, but a GREAT one!! Quite a few of my neighbors have commented on how great it looks and what an improvement to the overall appeal of the house it made. Every aspect of the process was handled professionally and based on my needs and requests. I had a few specifications that were not common requests and they were able to accommodate them. I will also be looking to replace my asphalt driveway, with a concrete one, within a year or two and you better believe I will be calling D.M.Terrill Contracting.

Dear Doug,
I just had to write and THANK YOU for the incredible job on our patio! It has added a whole new dimension to our home, we couldn’t be happier!! Since I couldn’t make up my mind on which colors to use, your recommendations were perfect! I also want to thank your crew; it’s refreshing to deal with people that really are concerned with satisfying the customer! I would recommend your services HIGHLY to anyone! Keep up the good work!!